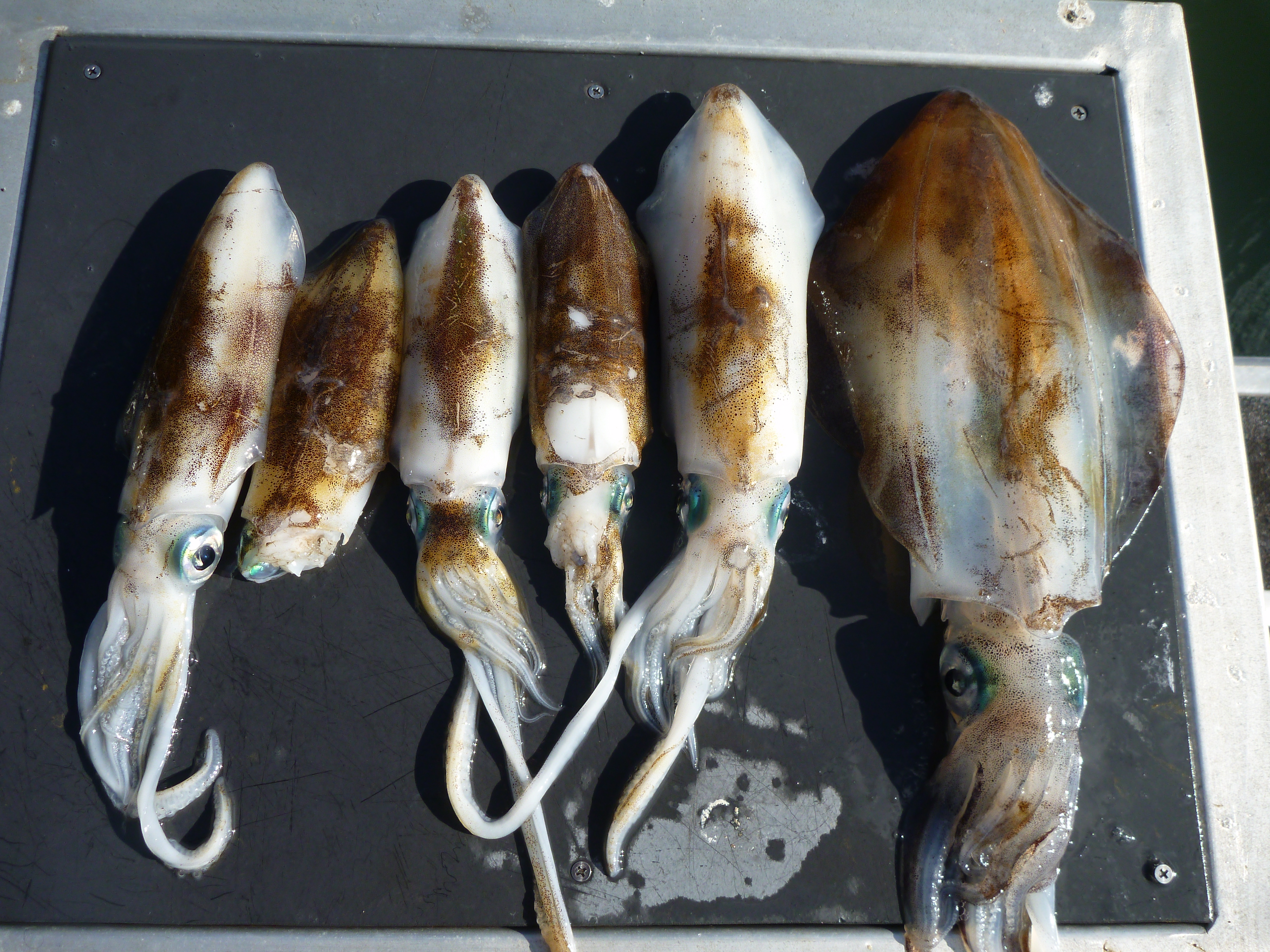 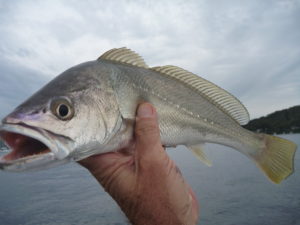 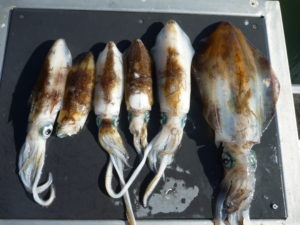 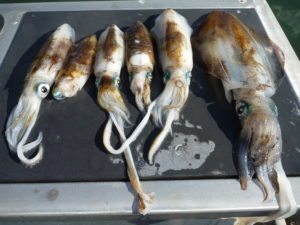 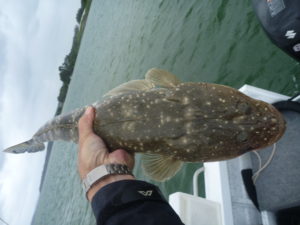 Fishing in Pittwater is good at the moment . Water is clear and still warm . You can find plenty of squid . Just look for any weed beds with clear water and start throwing your squid jig around . They will find it . I caught 6 big squid including one giant yesterday . See the photo . They fed 9 of us for dinner with a thai chilli noodle dish . I am using a 2.5 g squid jig in the natural brown colour . It looks authentic in the water but I know the white ones and the pink ones also work in Pittwater . The squid are also in the deep so here I use a running sinker rig and a 1 metre trace from the swivel . You can also use a paternoster rig but I prefer the running sinker rig as you can make the jig dart around .

Flathead are also biting , look for the drop offs and at high tide the flats or shallow areas . Good around the jetties .

Jewfish are also around biting on plastics and live bait . I caught a school Jew yesterday and a small Flathead while moving around to see what was biting . 5″ soft plastics here with 1/4 oz and if in the deep 1/5 oz jig head on 3/0 or 5/0 hook .

I didn’t fish for bream but I know they are around as are rat kings .

The moon is good for fishing this week and weekend .

How to clean a squid in 47 seconds (Video)

over the last 18 days I have been fishing in Lake Macquarie,Swansea ,NSW.my target was to catch as many flathead and squid as I could manage . The results , 85 flathead , 126 squid , 5 mud crabs , and 9 blue swimmers . Plus bream , whiting , tailor as by catches .alos I couldn’t fish everyday due to weather and wife .
Most of the fishing was done around the marks point drop over and the various flats and channels from the old marina site where the coast guard or maritime live .
I have told you what gear I used previously , so I will concentrate on where and when and what . My rules are that any flathead under 40 cm gets released , and any over 58 cm gets released . The best eating are the ones between 40 cm and 55 cm . Also the ones over 55 cm are female and are the breeders so you want to let them go . Males only grow to about 55 cm .
Whilst plenty of times they were hard to catch , there were a lot between 60 cm and 72 cm ,sometimes to the point where I would catch 5 flathead and have to throw back 3 due to being too big . My biggest for the trip was 78 cm Don’t forget , my gear is only 10 lb leader and 6 lb braid .Not one fish wore through the leader and was lost . The reel was a 2500 and the rod a 2-4 kg 6’6″” .
I actually caught one 70 cm flathead on my bream gear , 1000 reel, 1-3 kg rod 6 lb leader , 4 lb braid , with a # 2 small hook . Shows you fish light and have fun playing them.
Where did I fish ? I always drift , never use the anchor . I think you have to find them . Don’t wait for them to come to you , they may never come .I fished the channels where the tide was running fast , the flats when the tide was right , and sandy bottoms where there were weed patches scattered around it . I didn’t need to go anywhere else . I fished all tides , but different spots depending on the tides . In future blogs , I will explain each area in more detail of how and when and with what .Below is Byran with his 40 cm bream from the lake .

john’s 72 cm flathead .a beatuful fish . I taught John my methods with soft plastics last year . Now he catches flatties all the time in the lake , whenever he needs a feed .

Don’t worry about the weather either , many of my best catches was in the rain and wind . Jus work with the wind and current in your drift .
In my opinion , anchoring is a waste if time if you want to catch a lot of fish . Hunt them down , it is much more fun and the time goes more quickly .

the 78 cm flathead . I was alone so the photo was the best I could do quickly before releasing him .
Read More

Squidding and Fishing for Flathead at Lake Macquarie

took the three teenagers for a one hour fish . One 48 cm flathead and 14 squid. Had the lot for dinner with 8 of us . Not a bad catch.
All caught at the drop over at the end of the channel opposite marks point headland . Squid jig was rigged to get to 17 ft , or 6 metres. My preferred rig is running sinker to a swivel and then a 1 1/2 metre leader , 10 lb strength . Let it hit the bottom , reel up a metre and rip the sinker upwards like a soft plastic jig . Just let it sink again so the line is tight and rip again. Just move the jig constantly and they will find it . Over the last 18 days , we caught 126 squid using this method . 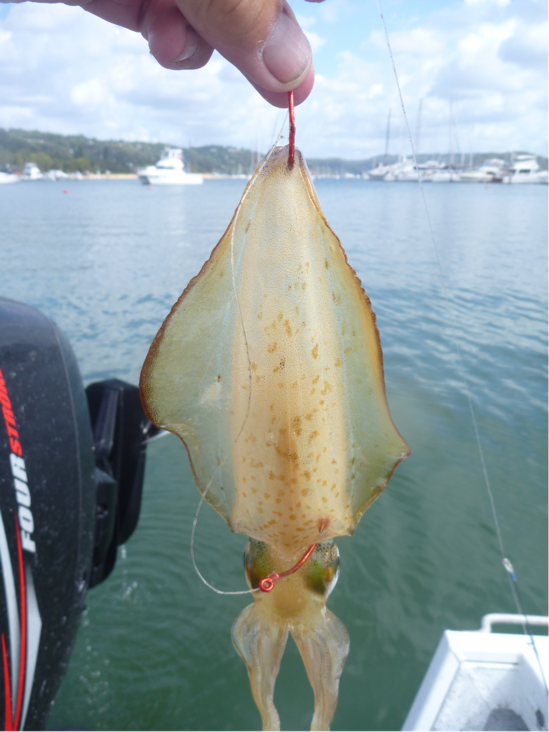 How to rig a live squid

Best way to rig a live squid is with two hooks . The one furthest up the line goes into the tip of the squid’s body . The second hook goes just lightly into the skin of the squid near the head . Both hooks must be exposed so they catch the fish easily . See the photos below . If you troll , don’t go any faster than 2 knots , otherwise the squid will die . If you drift , use the lightest lead you need to just get the squid down to the depth you want to fish . Usually two thirds of the way to the bottom is a good plan . You can leave the bottom hook free to drift with the tide if you like , but I don’t as many times the head is hit and the top is not so the bottom hook is the handy one . You can put the hook through the other , that is through the skin and out , but make sure it is exposed . This way is quick and simple and gets the squid into the water quickly . Good luck and hang on ! . Stay tuned and get fishing !