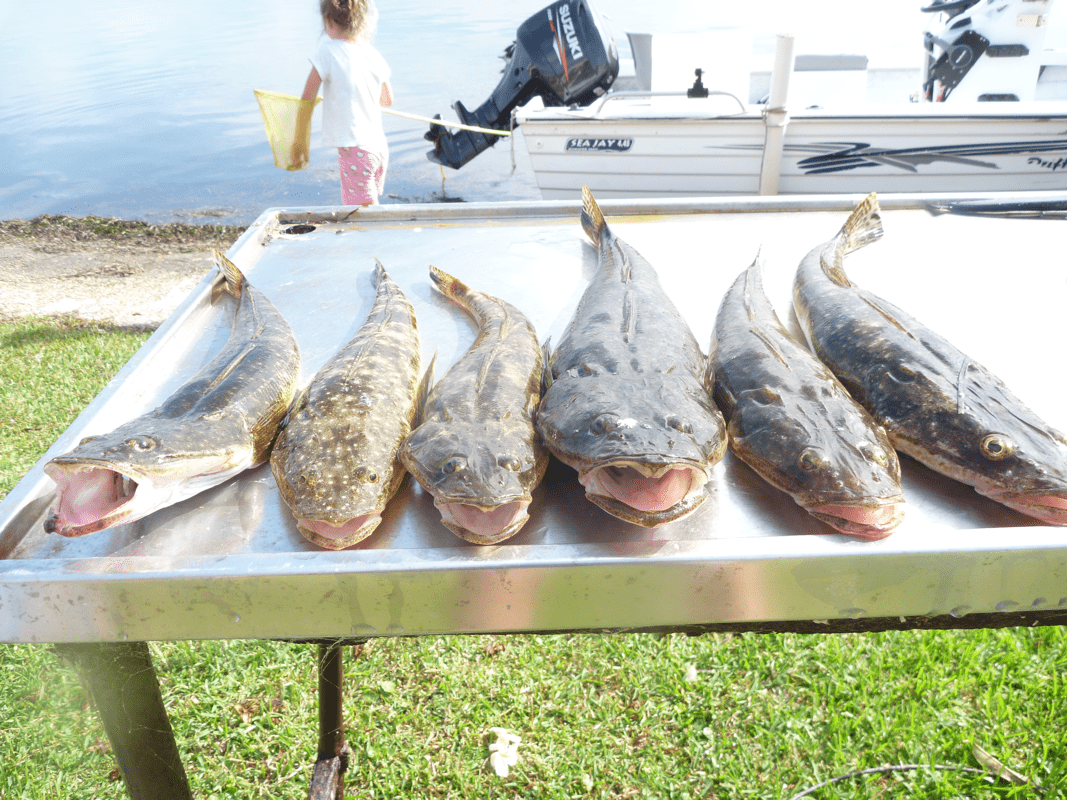 Day one of holidays . Time for some flathead for the fridge for dinner with the first day is always a scouting trip to find out where they are .
6 am start , beautiful weather so we headed for the channel where it was running in up to high . The water was racing so out came 1/4 oz jig head and 5″ soft plastics . Always fish with the current when it is running as the flathead will be facing the current and you bring the plastic down to the fish right in front of its eyes . It wasn’t too long and we had one in the boat . Then another , and another . We finished about 9.30 am to go in for a feed . We had 6 flathead to clean plus 3 smaller ones we let go . Not a bad morning . My feelings are that under 40 cm they go back and over 58 cm they go back . These are either too small or the breeders . See the video of the cleaning table .
The technique I have described many times in the blog but it is simple . Find a channel where the water is running , drift with the current . Cast up stream so the lure comes with the current . I know this sounds wrong but it is right and the lure sinks to the bottom quickly coming with the tide . Your skill is to work the lure so it bounces along the bottom up and down. The fish will hit it . That’s why they are in the current !
Try it and you will catch them . Enjoy the video . Tomorrow we will try new places and tricks . Stay tuned. 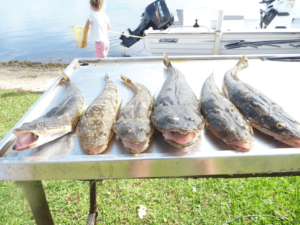 Second day fishing we went to try new spots . So over to the other side of the lake to coal point and drift the reef bed towards Toronto .
After two long drifts we had nothing so we went over to green point . It was a rising tide now so we drifted along the bank and we were casting towards the rising shore . Finally one fish in the boat and then another strike with a big flathead that took the drag on a long run . She somehow got off .
Late afternoon we went out again and now it was a falling tide . The three of us bagged 8 flathead and one big 40 cm bream . The gear we used was 2500 reel , 8 lb braid and 10 lb leader . A 3/0 hook with 5″ soft plastic , 1/4 oz jig head . One used a 2/0 hook with 1/4 oz jig head and 3 ” clear jerk shad . The other colours were pearl white and pink . One of the flathead was a big girl at 64 cm so a nice photo and back she went .
Like anywhere you have to find spots according to the tide . Rising tide hit the flats or the drop offs near the flats . Falling tide hit the drop offs or deeper water near drop offs . This is where they will be .
If you are fishing Flats then hit them on the last of the run up and first of the run out . Other times mostly a waste of time. 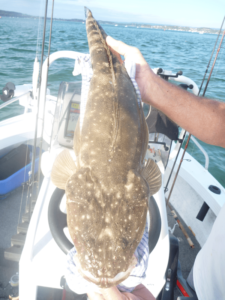 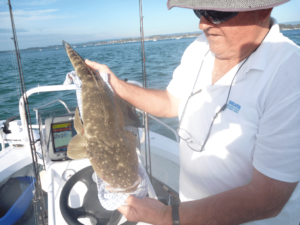 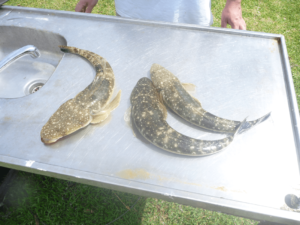 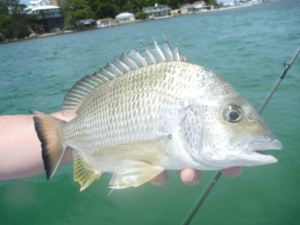 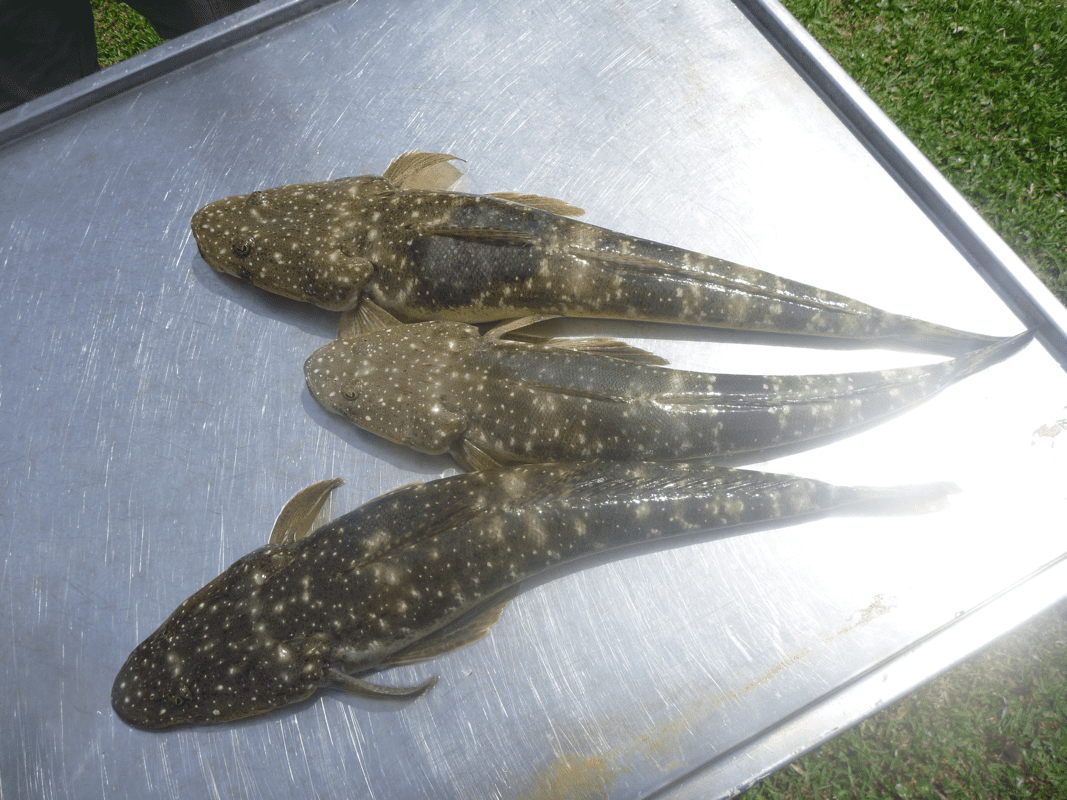 Wind has been howling at 37 kms so the skill is to find the fish where the wind is protected . So the only way was the fish the FLATS.
Here we could get out of the wind and drift st a normal pace . So the tide was running up to high , an hour to go so we knew this is prime time . We scaled down our gear to bream gear as it was only 1.5 – 3 ft deep . The gear was 4 lb braid ,6 lb leader , #2 hook and 1/16 th oz jig head .. we used the 2.5″ shrimp soft plastic as the prawns are running .
So over the hour and half we caught 4 nice flathead , all between 46 cm -51 cm . Perfect for the table .
THE TRICKS – if y it want to fish the flats and there is a lot of weed and sand patches , go down to light gear . You still get weed caught but not as much and when you get a strike you have a lot of fun getting the fish in .
The tide is best at an hour before the high to an hour after the high . If you are still catching fish then stay but it will decrease . I don’t think it is worth while fishing the lower tides on the flats as the fish reposition themselves on the run out in the drop offs . You may catch a fish or two but the prime time is as above . As the tide goes out reposition yourself to cast into the drop offs . Remember it is always better to cast up stream if there is a current as the fish face the current . See the good video in the flats . 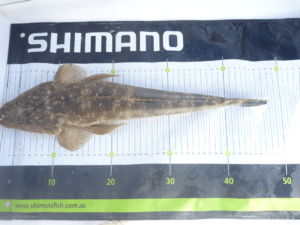 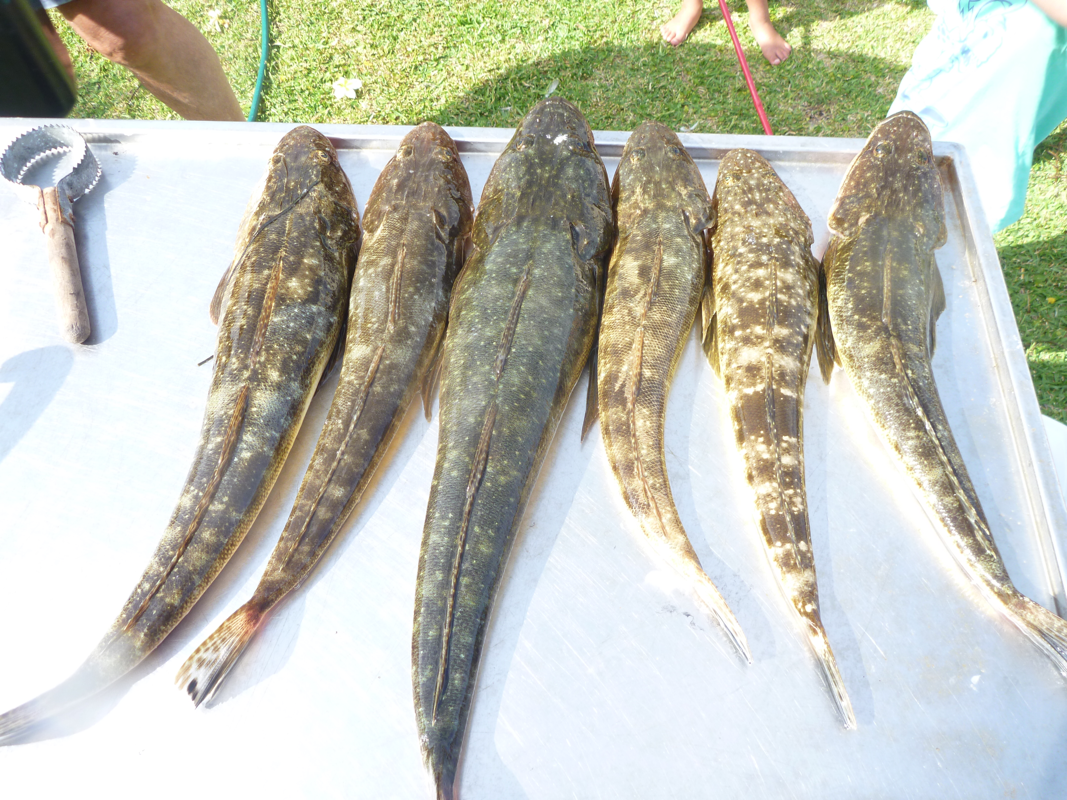 The wind was howling again and in the morning we only got 1 flathead . This was fishing the drop off from the flats as the tide was running out . Same rig , just cast over the flats and bring the soft plastic down along the drop off until you get it to the boat . Keep it hitting the bottom and you should get some fish . 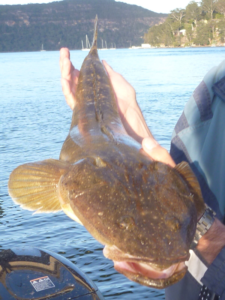 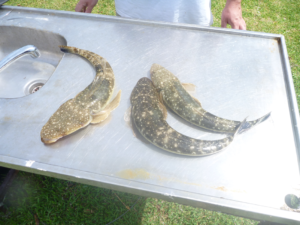 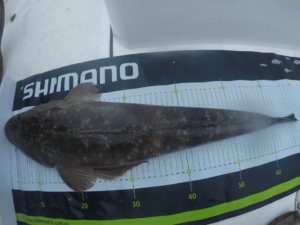 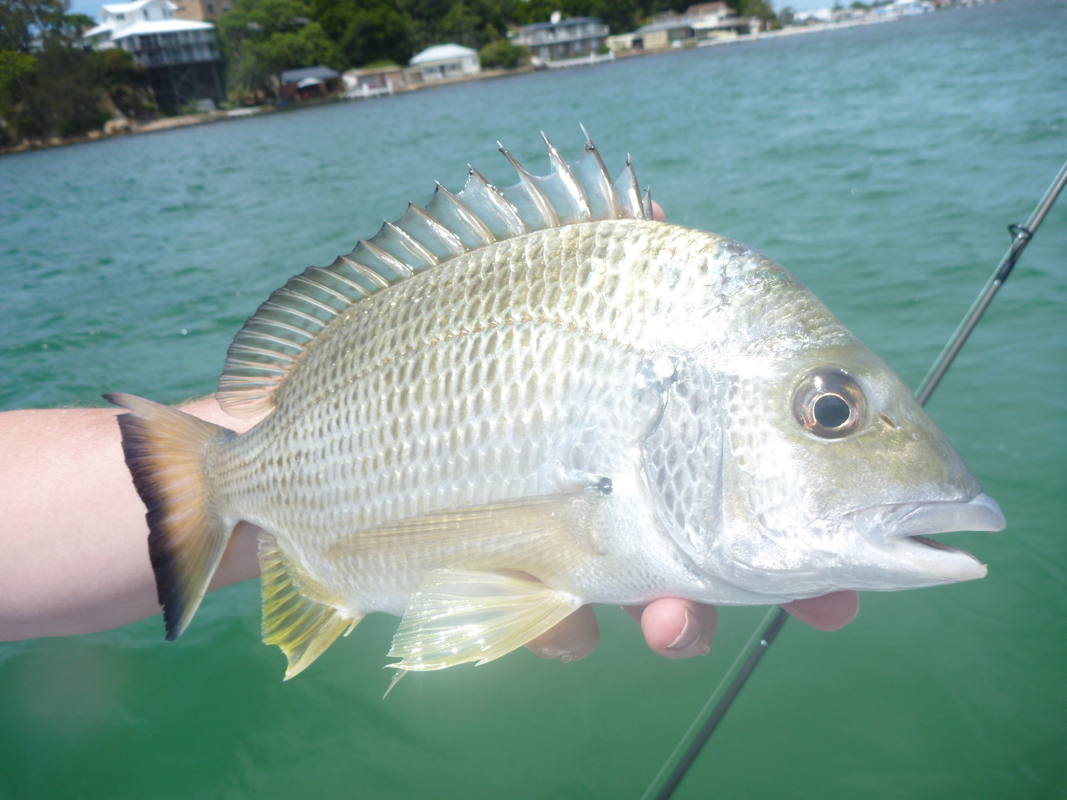 This morning I took our next door neighbours grand son fishing , to teach him the finer points of soft plastic fishing for flathead .
The wind was blowing again so a tough lesson , and into the fast running water channel we went .
casting against the wind and bringing the lure back with the tide and drifting fast was a hard first session for him . As luck would have it he landed the first fish in the boat . And it was his first on a soft plastic . See the photo . So he caught it , cleaned it and ate it for dinner . You can’t get better than that for a 13 year old . Great to see things go right occasionally .
We caught two more and that was the story for the day . I have to go back to Sydney for a day . 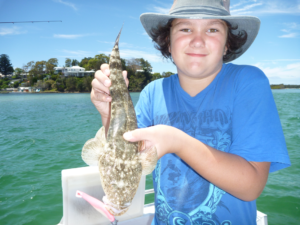 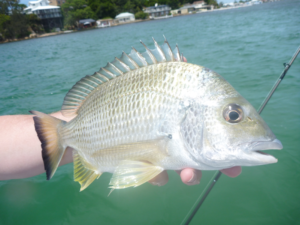 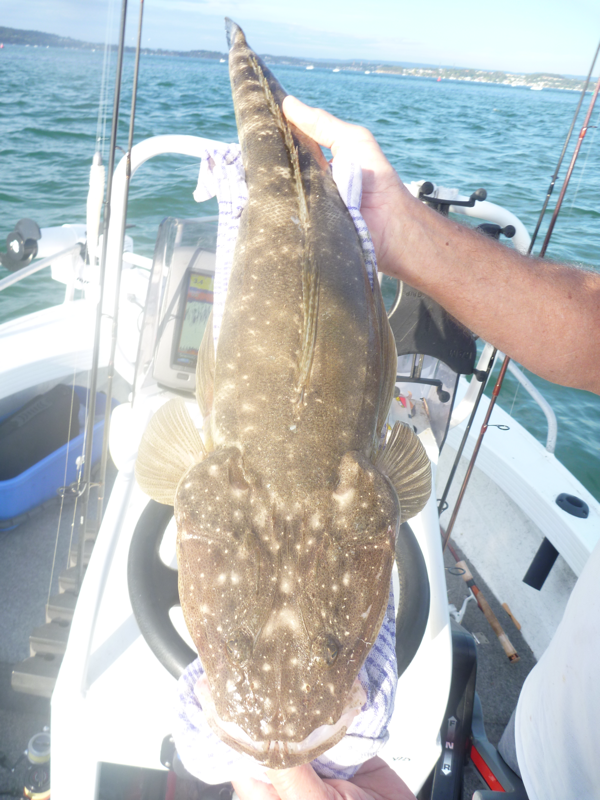 We went out this morning to catch some nice big ones and try some new spots . There are plenty of channels amongst the flats in Lake Macquarie so you don’t have to go far . the tide was just starting to run out so things looked good . First channel a small flathead , throw back . Next channel a nice one for the fridge . At the next channel in comes a great 72 cm beauty . Some fast photos , see below and back she went . We thought there might be some males hanging around but not one more touch . So the morning of about two and half hours saw three fish caught , two thrown back and one kept . Not a lot of fish but the big one made up for it . See photo 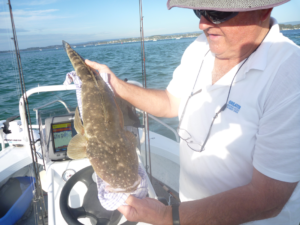 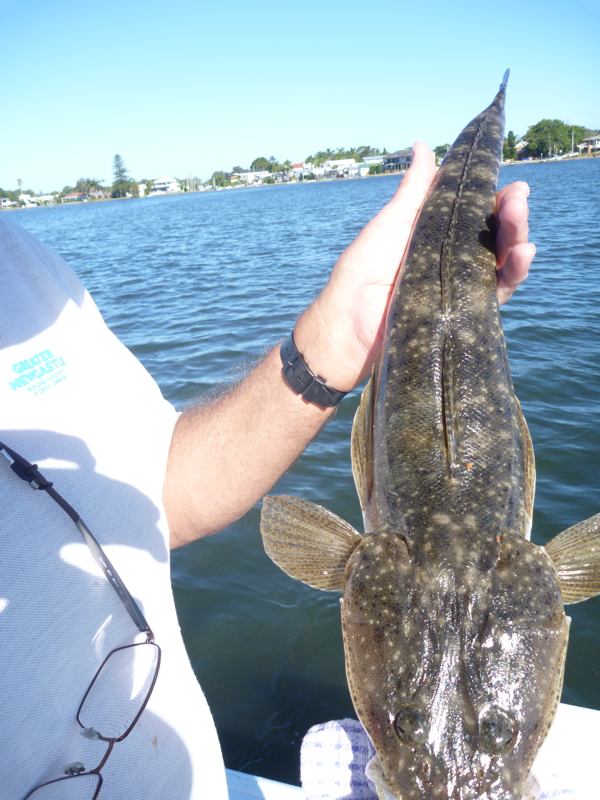 The wind was high so we went flats fishing again in the protected bay . Now flats fishing is great fun but you need to have two scenarios .
1. A protected bay with weed and sand patches . The weed has to be light , don’t go if the weed is thick and heavy , especially if there are no sand patches . The fish will often hit in the sand patches , they are either there or just hiding next to it in the weed . Fish light and cast with the wind and drift with the wind .
2. Go where there is clear water and you can see the sandy flats amongst darker water . If the sand has ridges where the water is slightly deeper , that is where the fish are . Even better if there is some rocks or weedy patches around . Stick to the slightly deeper water and cast to the shallow water and bring the lure back to you hitting the bottom at all times . If the flats are clear and not weedy you can use five inch soft plastics and heavier jig heads to cast further .

we chose the first option here as it was windy . Light gear as mentioned in previous blogs . Two hits and both of us missed them . Then on he next drift one small flathead , sent back only forty cm . Next drift in comes a beaut fish , 57 cm long , just one cm short of me throwing it back . The fight with this flathead on 8 lb leader and 1000 reel was terrific . This is fishing . It ran and ran , four or five times when it saw the net . Keeping the rod tip down near the water and pressure on the fish got the job done . With light gear and flats fishing keep the drag at 1/3 rd of the breaking strain of the leader and you will have no trouble landing it eventually . See the photos .next time I will get a video . The fishing went quiet so we ventured out into the channel behind an island to get out of the wind . First drift another good flathead 53 cm , and that was it . Nothing else after that . Three nice flathead , two let go . 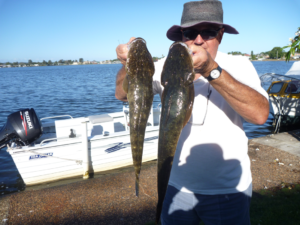 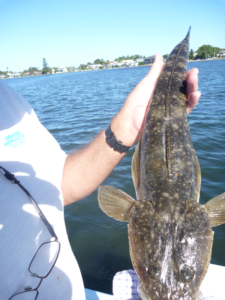 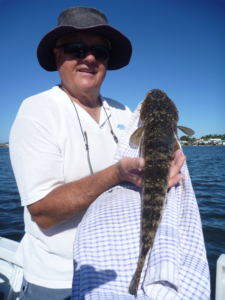 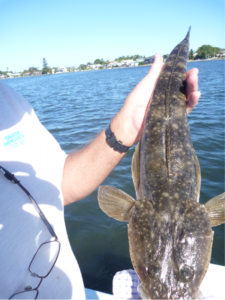 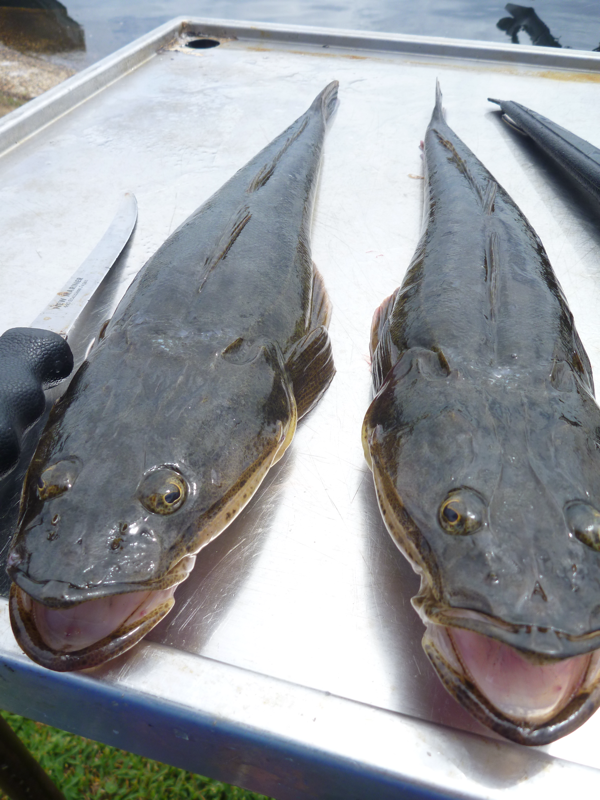 Today was very windy so it was a matter of keeping out of the wind . So I went to a bay where it was protected to fish the flats and small drop offs . The bay I found was 1.5 ft -2 ft on average and had small drop offs to 3 ft and 3 1/2 ft . I could see most was short weed with a lot of sandy patches in between . Looked good . The wind was still coming in strongly so the drift was quite fast . I spent an hour and a bit there . Using bream gear , 6 lb leader , # 2 hook on 1/16 th oz jig head . 1000 reel and 2-4 kg rod . Nice and light . I used the 2.5 ” Berkley shrimp in new Penny result – two nice flathead 53 cm and 48 cm . Both came home for the table . My technique here was to cast with the wind as this is the direction of the drift , let the lure sink and leave it there for two seconds then twitch it to make the prawn look alive , then let it sit again for a couple of seconds . Repeat . You do pick up weed on the hooks but you minimise it with the slow movement and twitches . See photos 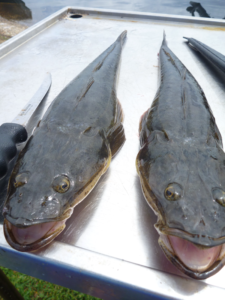 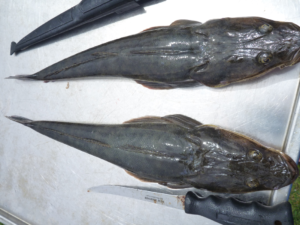 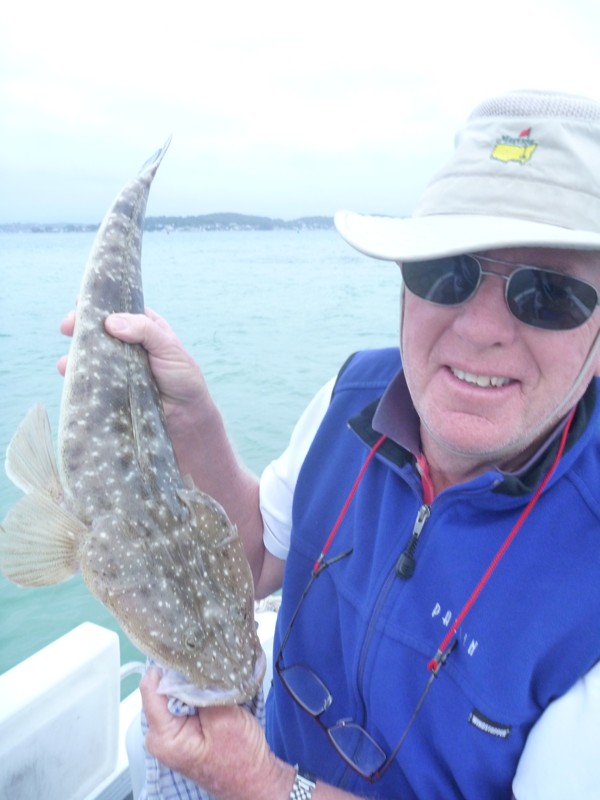 Today was a beautiful morning with only a light breeze so out we went at 6 am . Today it was a run out tide , an hour till low . Three of us as we had a guest . All using 5″ soft plastics jerk shads , one white , one pink and one pilchard . Second cast and in comes a 65 cm beauty on the pink colour . A few photos and off she went to give someone else a thrill . We fished for 2 1/2 hours for 7 first one was the biggest but all were good eating size . We kept 3 and 4 went back . See photos 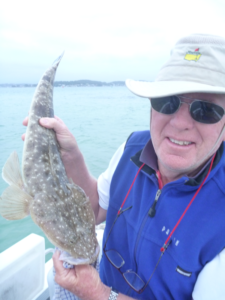 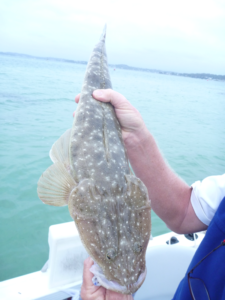 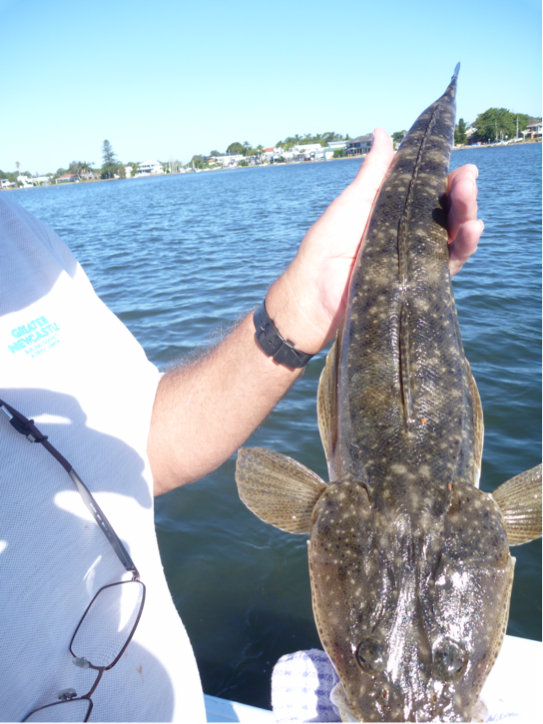 Weather is good angain today so out we went with three of us chasing more flathead . Today we wanted a few to feed all the family tonight , 9 of us , so the goal was 5 edible flathead . No sooner had we reached the channel , as this is where we wanted to fish today , did Adam hook a 54 cm flattie . One in the boat ! . A run out tide for two hours before low so we thought we would be in with a chance of 5 . For the next hour , nothing so we went to a new channel to fish the final hour before low tide . Same gear as yesterday . Suddenly we hit a patch and three came in the boat quickly . Then it went quiet until the turn of the tide and another 3 came in . So we had 7 so two can go back and we kept 5 for dinner .
The others wanted to go for a fish so we had caught two squid on the soft plastics so we thought let’s have a calamari entree for dinner . So off 4 of us went squidding . We were right , they were around now and we went home after an hour and a half with 20 squid . That was enough for a Thai calamari noodle dish entree before the fish and salad . Can’t get fresher seafood than that . 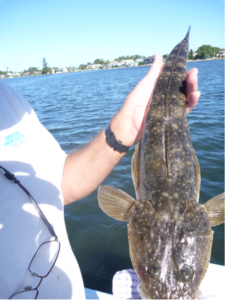