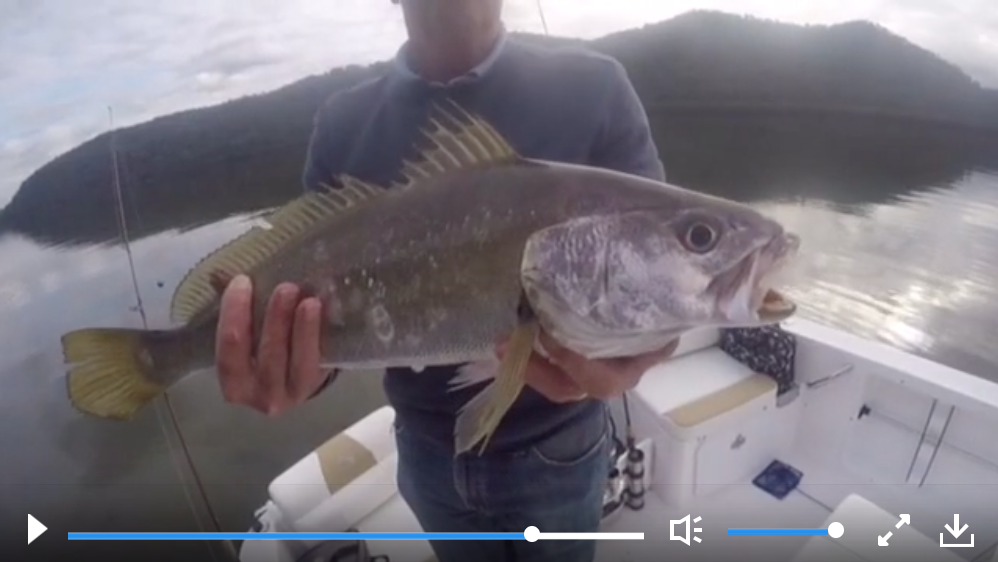 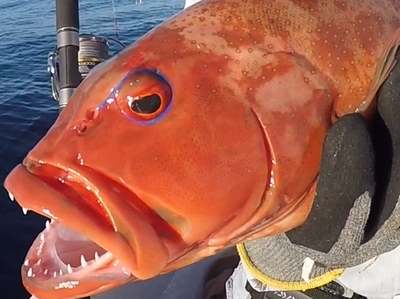 This morning we went out at 6.30 am . Weather was terrific . We only had 3 hours so with travel time , only two hours fishing .
We started trolling and straight away Tiffany hooked a small mackerel . Next troll she hooked a nice coral trout . Two more Mackrel were caught but nothing big . Another nice big coral trout . We were after a big wahoo so we trolled along the drop offs along the coral reefs but nothing hit . We ran out of time so had to get back to pack and go for the plane to head home . A great morning fishing to end the trip . See the photos below and the video of the coral trout . 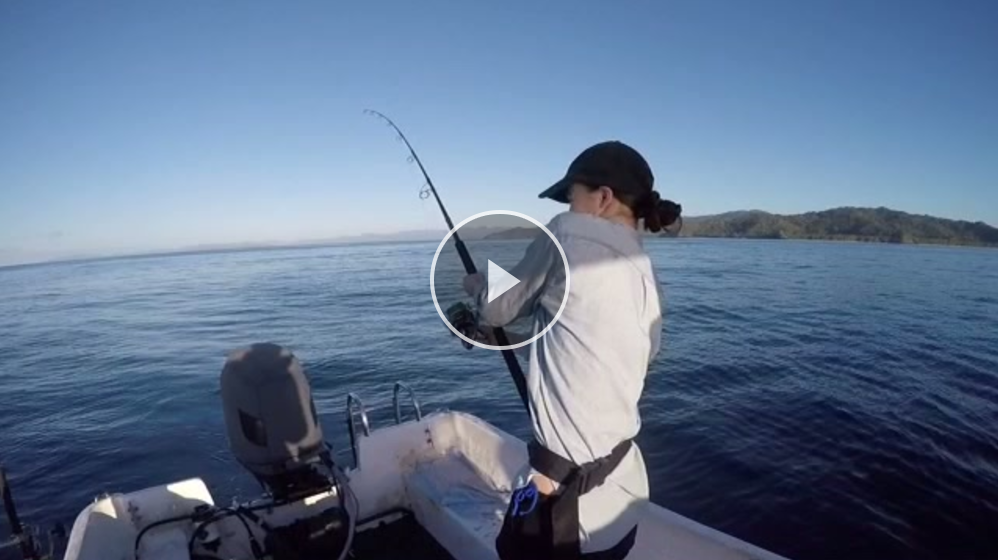 A perfect day , no breeze , water flat as a pancake ! We went out to the outer reef number 3 . Everything looked good . One small coral trout came in on a soft plastic . Then nothing . Poppers , jigging and soft plastic jigging couldn’t get a bite . Plenty of bait fish around but no interest . We went to the next reef , same result . We went to the next reef , same result . The weather was too perfect maybe . We hit a fourth reef and started trolling with the big lures . Finally they started biting . I think it was the change of tide . So we ended up with two mackerel , one coral trout , and one big barracuda . So 5 fish for the locals dinner . We fished from 6.30 am till 11.30 am so in summary it was slow , saved by the last hour . See photos and video of the barracuda .see how angry the coral trout is below. Nice shot of the mackerel with the lure under the water . 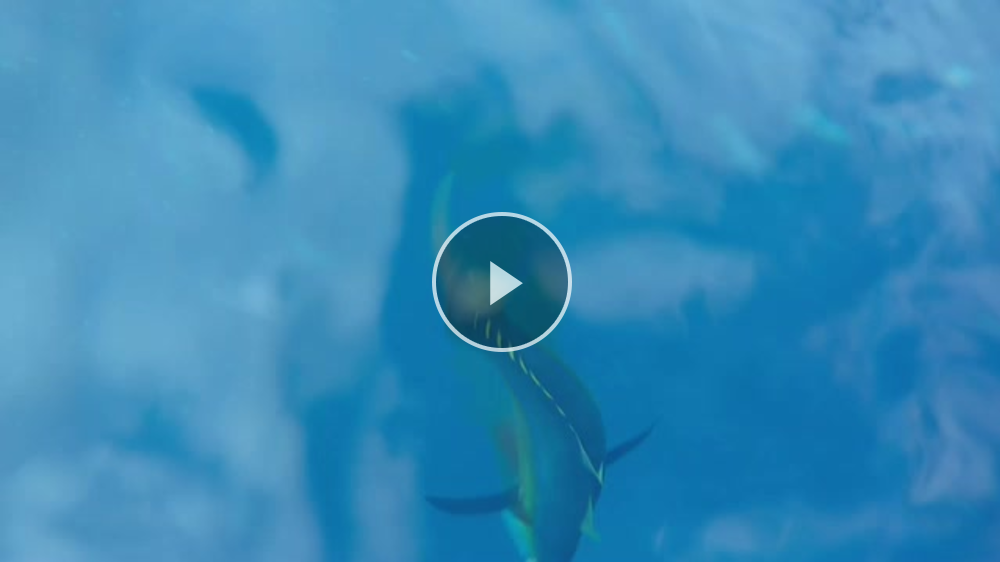 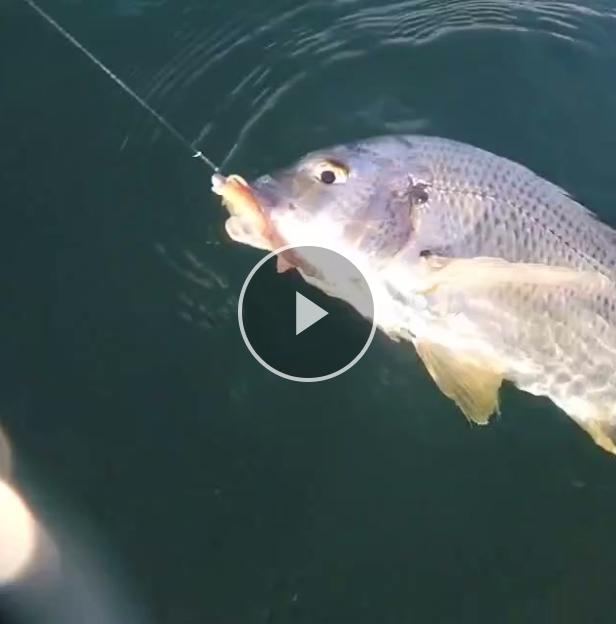 Due to the rainy weather I decided to go after some bream this morning . My thinking was to fish deeper water amongst the moored boats as the fresh water was on the top so the bream would be down deeper . The morning was overcast with really light to no rain , and no wind .
I fished in water that was between 6 metres and 9 metres deep amongst the moored boats . The tide was high so I was fishing the beginning of the run out . In the first half an hour I had 3 fish in the boat , 2 nice baby snapper and one nice silver bream . All 30 cm . A couple of totters rounded off the bream .All released . Then just as I was working the 2″ shrimp up toward the boat , it was hit by what I thought was a trevally. On my light bream gear , 1-3 kg rod , 1000 reel and 4 lb braid , 6 lb leader , 2″ soft plastic Berkley shrimp , in new penny colour , 1/16 th oz jig head and # 2 hook , the fight was terrific . Time and time again the drag went screaming and all I could do was hold on . It took about 5 minutes of this before I saw a nice rat kingie come close to the surface . Eventually it was in the net and measured 60 cm . Back it went to harrass some other fish . One nice flounder finished the 2 hour session , before the rain came in and I went home .
The water temperature is 17 degrees and the bream are very touchy . I found that you need to work the soft plastic very slowly . Use a light jig head and let it fall slowly to the bottom . Once it is there work it gently and leave it sitting on the bottom for a lot longer , 3 to 5 seconds . When you work it do it gently as if the shrimp it just darting away and falling . Slower the better . A lot of the time they are hitting it on the drop near the bottom.
Read More 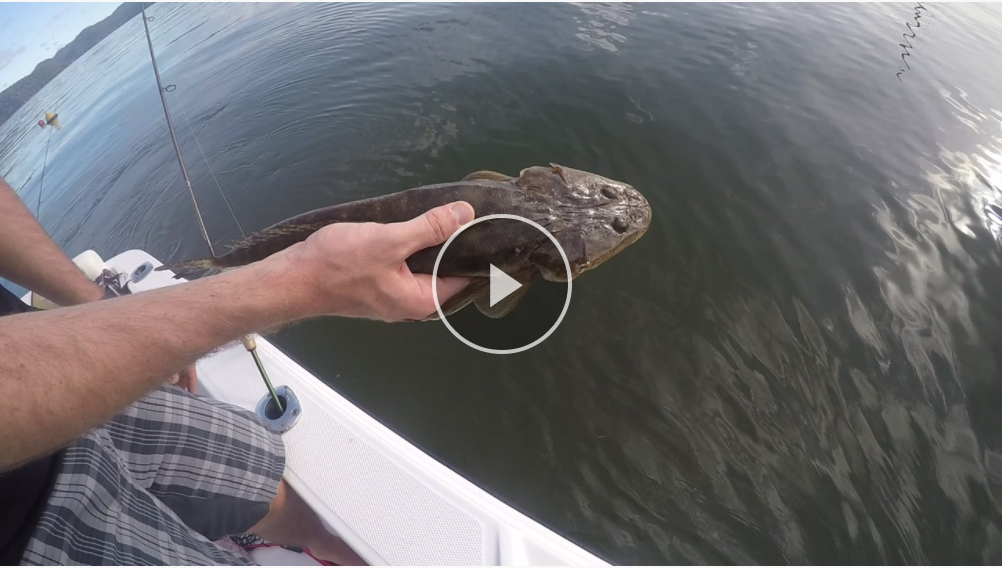 Fishing is a bit slow with all the fresh water still apparent in Pittwater and the Hawkesbury . This afternoon we went for some Jewies in the Hawkesbury for the run up tide . We could only manage one livie from a sabiki jig , but this was more than sufficient as it did not get touched all afternoon . There was so much water in the river that the top water was still running out when the tide had turned and it was running in . All we managed was one flathead which we released . See video below .we were using the flathead gear, 2500 reel , 8 lb braid and 16 lb leader . A jig head of 1/2 oz , 6/0 hook and today we used the paddle tail soft plastics .
there is always tomorrow ! More photos and videos from Vanuatu soon.
Read More 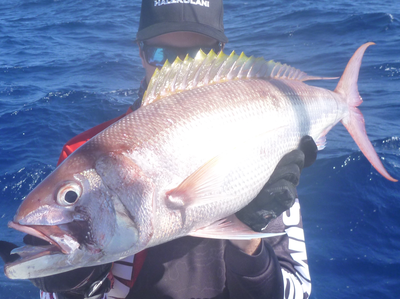 This morning we were up at 4.30 am for breakfast ready for a 5 am departure to the ” sea mount ” where all the big dog tooth tuna live and wahoo . It took us 4 hours of bumpy seas to get there , with everyone wondering if it was worth it . Two boats , 9 fishing so we must get some . First drop with the jigs and two were on , reels zinging and braid going off the reel like cotton . These 20,000 reels had 170 lb leaders , 100 lb braid and the drag locked up so tight that you could not pull it out . But the dog tooth pulled this like it was cotton and in no time both were busted off . Two of the guys had never caught a doggie before and were keen to get the big one . Everyone jigging frantically , up came what the skipper said was a puppy . I put down a 7 ” z man soft plastic on a 3 oz jig head , 20000 reel with 170 lb leader . Instantly I got a hit coming up and one 10 kg dogtooth in the boat . More jigging by the others and more hits and big bust offs . These doggies are big and unfriendly . I put down my softie again and bang , it gets hit straight away . Another 10 kg doggie . Not bad , 3 in the boat in under 40 minutes . Well that’s where it stopped . Huge hit after huge hit , drags screaming rods buckled over , and backs and arms aching . Not one got landed . Frustration all around . We had double hook ups , triple hook ups , and one quadruple hook up where all four were going for a big one . All busted off . Amongst the 5 of us we would have lost $500 worth of jigs ! Amongst all this mayhem Tim caught a nice Rosie job fish , others caught some small skipjack and one nice wahoo and one 15 kg yellow fin tuna . Everyone was focussed on the dogtooth but at the end of the day only the three in the morning were in the boat . Final tally was about 40 lost so all the stories are about the ones that were huge that got away .
The sea mount lived up to its reputation and so did the doggies . They are the hardest fish to get in the boat , harder than kingies . The two boys that had never landed a doggie , still keep that reputation , so we are going out hunting them tomorrow . Was the trip out and back worth it today , I don’t think so due to the 61/2 hours travel time , but it is something you have to do once to understand it . See some photos below but no dogtooth . You can also see a couple of nice dishes we had with our 4 course dinner back at the Trees and Fishes lodge , relaxing after the day .one is the fresh calamari caught out the front , one the deep fried wahoo with Ali, and the third is surf and turf ,scallop in between beef. All delicious followed by steamed wahoo with coconut rice ,and for dessert cream caramel and vanilla ice cream . Not bad for a fishing resort !! 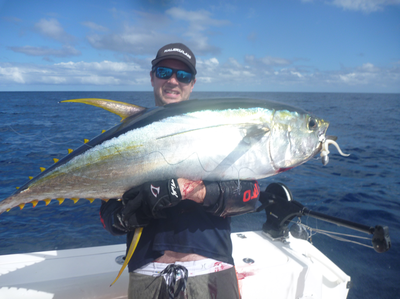 Day one of a four day fishing trip at the Trees and Fishes resort . What a day ! Went out to the fad for yellowfin at 9 am , arrived there at 9.30 am and by 9.45 the first 25 kg yellowfin was in the boat after one bigger than that was lost . It was caught on a 12 inch or 30 cm popper casting . By 10 am a second one was in the boat 30 kg caught on a 7″ z man soft plastic in white colour . This fought well as it was on a Stella 20,000 reel , 100 lb braid and 170 lb leader . The jig head was 3 oz tt lure .The rod was a PE 6-8 .
This kept going all morning into the early afternoon . Lunch was kept being put off as the fish were all around us . By the time we had lunch at 1.30 pm we had a tally of 7 yellowfin tuna , not one below 25 kg . Plus we had one big wahoo , caught on a jig only 60 g , and several small fish 3-4 kg for live bait . The big loss of the day was a huge yellowfin right at the boat , maybe more than 50 kg , caught on a big live bait on a downrigger at 60 metres deep . It was just 10 metres below the boat when the hooks pulled . Then there was this huge wahoo caught on a jig , only 60 g jig but on a PE 6-8 rod and 170 lb leader . A great fish . One of the great experiences was a double hook up on the yellowfin , both on poppers casting , mayhem on the boat but very exciting . The rest of the afternoon 2 hours we went after dog tooth tuna , jigging up to 100 meters deep . This produced nothing except a ramora .
The other boat has a similar day but the prize went to Andrew who managed to reel in w 61 kg yellowfin from a live bait right at the end of the day . This photo will follow when I can get it .
Tomorrow off to a place that has big doggies . I will let you know what happened . In the meantime enjoy the photos below . 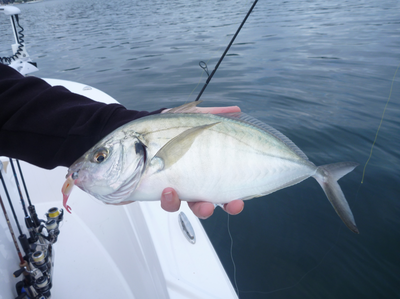 Fishing Pittwater in the morning – Bream, Flathead, Trevally and Salmon

S perfect morning to go out . High tide at 11.30 so we are fishing the run up tide . Great for bream , flathead , trevally , salmon flounder etc . We decided to chase flathead first as the first of the run up they will be on the move . We hit the drop offs and cast up on the shallow part and dragged the soft plastic back down the drop off . We wer in 7 metres of water dropping to 13 metres as. We think the flathead are in the deep being lazy . First hit was a trevally . Next hit was a nice 50 cm flathead . Then one lost . It went quiet as the tide got higher so we decided to change and use our bream gear for a nice winter bream . For the rest of the fishing not one bite from a bream, not even the babies . Another trevally and a small flounder finished off the morning . 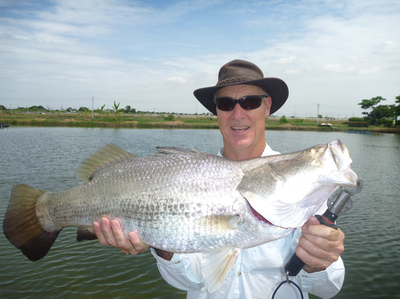 Last day fishing in Bangkok so we are returning to the barramundi farm to see if they will bite as well a second day . We only had 5 hours today as we needed to head to the airport at 3 pm . Within 10 minutes Barra were being hooked on our hard body lures and mostly lost . This continued for a couple of hours , one landed and two throwing the hooks back at us as they jumped and twisted out of the water . One fish hit the lure so hard it there back at us onto the bank .
After about 2 hours and 25 fish landed and released we decided to have some fun with poppers . I put on a small red and white popper and Jonathan put on a bigger red and white popper . The Barra went berserk over these poppers hitting them with huge books that sounded like thunder . See the video below . Cast after cast they hit the lures , many times missing the hook up but the fun was seeing them smash total tally of Barra caught and released today over the 5 hours was 81. The tally hooked and Lost would be nearly triple that .sll the fish were roughly the same size , around 6-7 kg . Photo gallery below . Enjoy the jumping Barra video . There will be more videos each day this week .