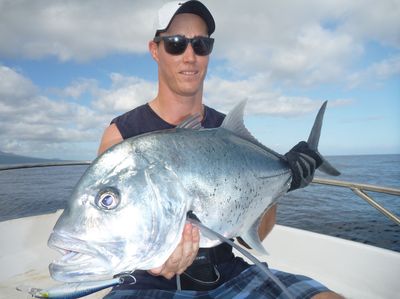 The first of 4 half day fishing trips . The weather was rough so we could not go out to the reef we wanted , so we went south to another reef . After an hour or so throwing poppers and soft plastics , nothing . Then we saw some birds . Nothing on the poppers but a nice GT on the 7″ soft plastic . We then trolled to the next reef and Scott caught a big GT , then a great dogtooth tuna hit the line . A short fight and it was in the boat . Next a triple hook up trolling , and in came three barracuda which the locals like to eat . A couple of coral trout followed .
Just as we were about to leave Adam has his popper smashed by a big GT . The hit was like a thunder clap . Off it went and took drag on the 14000 Stella which was locked up , off like it was cotton . Thirty seconds later it cut the line on the reef . Very exciting !
&#x200b;looking forward to tomorrow !