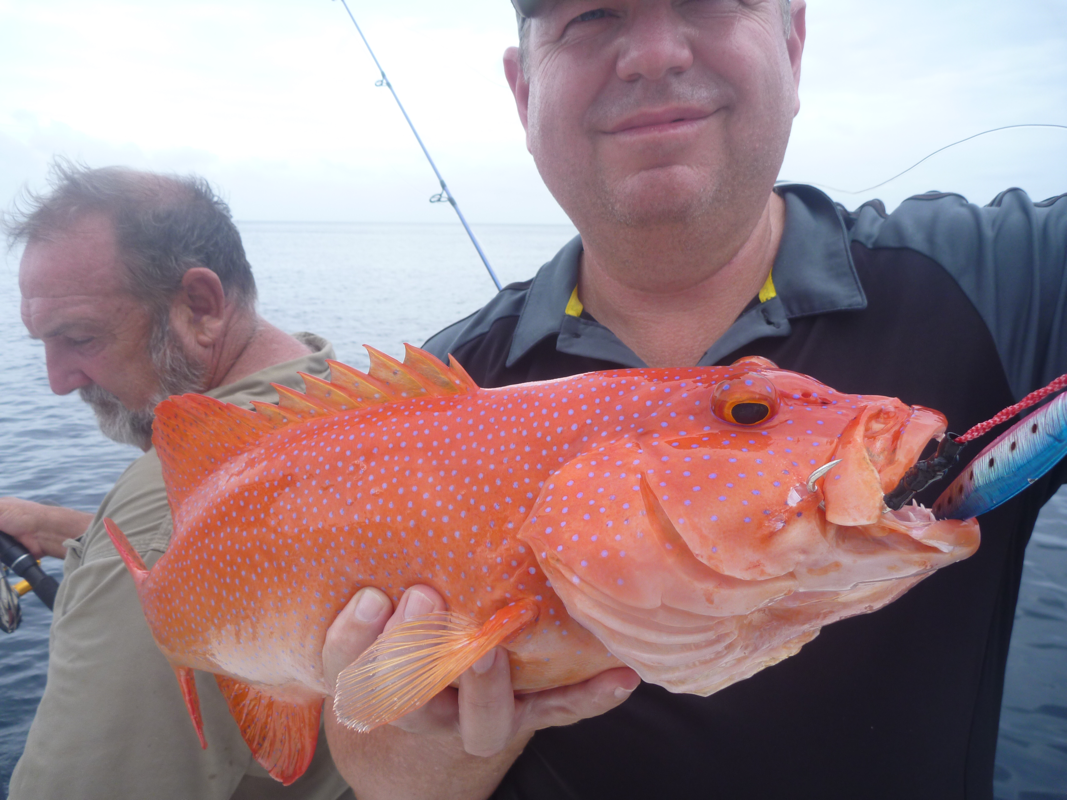 This morning we took the 4 wives out for a fish and a snorkel . As it was clam we went to the fads for popping to get some yellowfin tuna . Three rods out , two popping and one on a 7″ soft plastic. Within 10 minutes of popping a double hook up , one on the gold popper and one on the soft plastic . Both big hits . Mayhem , everyone scrambling to help the girls as the reels were screaming . As there were two fish on, the boat could not chase them . After about 5 minutes the tuna on the popper was sharked so over to the small red rod PE 3-5 strength , with 10,000 reel and 50 lb braid . This was a big fish for this rod so the 4 girls took it in turn to pull it in . Three of the guys helped at times and after about 40 minutes the great yellowfin was at the boat . Not before they got it to the surface twice to see how big it was . Third time lucky . About 25 kg or so , same length as the big ones but not as thick around the body .A great shot below . They were very pleased , but didn’t want any more popping ! So next we took them jigging . Surprisingly they learnt this pretty quickly and were quite good at it . Six or eight fish came into the boat , some photos below , then it was time for a snorkel and lunch back at the lodge.

In The afternoon the four of us went chasing dogies . We didn’t land one , the afternoon was quiet for a while but then we were hit with some big fish . One fish spooled Chris’s reel , all 300 yards of 60 lb braid , in an instant . Either a big sailfish or small Marlin . All of us were using bigger gear this time but we still had fish that we could not stop . Amongst the big hits we managed some smaller reef fish ! But the Sharks played havock with our catches . Just as we were finishing one small fish coming up got hit by something really big . We couldn’t move this thing . It was on the biggest rod I had PE 6-8 with 20,000 Stella reel 100 lb braid and 200 lb leader. We shared this rod for half an hour and still couldn’t get the fish up past the 40 metre Mark . Probably a big shark or grouper , but my money was on a shark as they had been constant all afternoon . Finally we busted it off as we had to go home , so it is there for one of you .
The Trees and fishes lodge is in my opinion the best place to go if you want to catch a lot of fish or you want to chase trophy fish . You can do either . The boats and gear and skippers are great . They will chase what you want and do any type of fishing you want . Or you can just follow what they say and catch what is going around .
The lodge itself, run by Angele is fantastic . From the moment you arrive at the airport you want for nothing . Food is exceptional , so is the service , and the accommodation is excellent . Whether you go with your mates or take your wives everyone will go home impressed . You just book through Ocean Blue here in Aus . You must get over there . Our wives were impressed and want to go back !