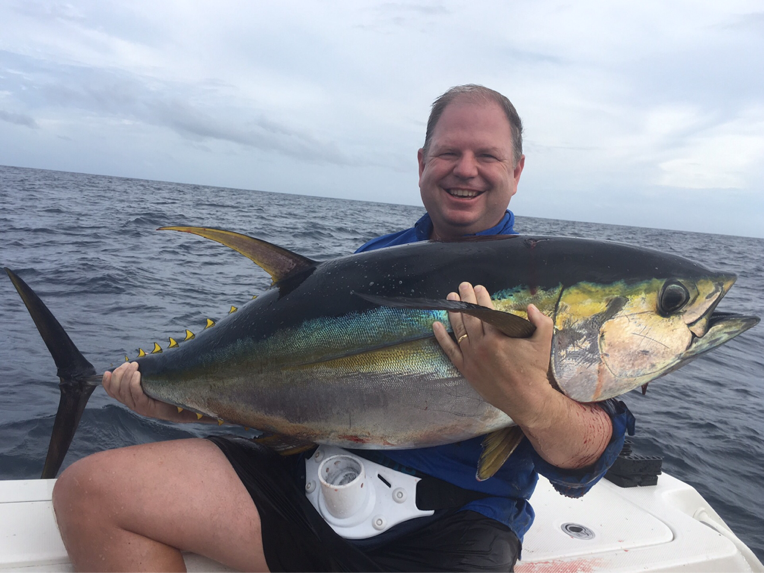 Today the boys have a full day fishing while the wives visit the market and then a relaxing day at the lodge . This morning we were after the big yellowfin tuna, popping the 11″ poppers on PE 6-8 popping rods and Stella 14000 reels , 80 lb braid and 200 lb leader . Well , it wasn’t even 10 minutes and Greg had this huge hit and he was on . The tuna took off and peeled nearly all the 300 yards of line off the reel . I think we had 20 kg of drag set . It took about half an hour and a couple of fishermen changes to get him in but eventually it was in the boat. What a beauty , 40 kg of pure muscle . See photo below.
Next about half an hour later , Chris was on , same rod , same popper . Not quite as big but it took off also taking half the line . Chris managed to get this one to the boat in about 10 minutes . Another beauty about 25 kg of muscle . Yellowfin were jumping out of the water everywhere but they turned off the bite and we didn’t get another one . So after about another hour and a half we took off for lunch and then to chase doggies .

The afternoon started slowly with only pike coming into the boat . Some bait for Paul . We then changed spots a couple of times and finally found a spot out of the wind and virtually no current . So we drifted here from 90 metres down to 50 metres . Plenty of bait on the sounder and then it all started to happen . Two hours of non stop action . No doggies to the boat ,but more than half a dozen bust offs and the same from sharks . My light weight jigging rod ,PE 2-4 with 5000 Stella was non stop with a 60 g jig . The sound of the braid peeling off like cotton is just an exciting feeling you never get sick of . Everyone was catching fish except the bait person ! But he did end up with a nice coral trout . So the fish in the boat were shark mackerel , big Rosie job fish , coral trout , GT,s, although the two big ones were shark food , we only got the heads up , skip Jack and more I can’t remember .. Chris caught a beaut amberjack,photo below. No doggies but it didn’t matter as we had fantastic fun.

I have to tell you about the rod incident ! Chris hit this good fish , not too big and then something huge hit and took the fish on his line . Well , this caused chaos. The skipper had to start the boat and tow this fish . Chris was not making much ground on it and the rod was bending like crazy with the drag at maximum for the rod. After about 10 or 15 minutes ,SNAP ! , the rod was shorter , so he passed it over to Paul to finish the job . He did by busting off the line with the shorter rod . We didn’t see what it was , a big shark or big grouper . But very funny to watch . See photos below . Last day tomorrow , stay tuned .